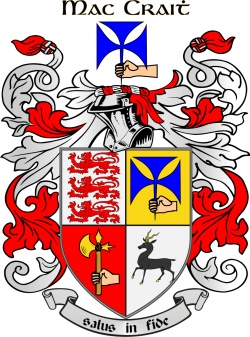 Design your own MCGRATH Family Crest

There were families of the name in early times in Donegal, Thomond, Waterford and the north of Ireland, where they came as settlers from Scotland. To take the Donegal MacGraths first, these were coarbs (incumbents of an abbey &c., who were successors of the founding saint) of St Daveog, now known as Termon Macgrath at Lough Dearg; their castle, though, was at the head of Lough Erne. The Thomond ( Tuadh Mhumhain: modern Clare & Limerick) family were hereditary filidh (poets and genealogists) to the O Briens. The fili (Old Irish: plural filid) was really more genealogist than poet, being bound by strict rules in 'job description': viz. to tell of the past deeds of the clan, and safeguard its continuous pedigree or family record. The Scottish family were orignally of Kintail. The name is fairly numerous in 19th century Ulster records, principally in Tyrone and Down.

It seems that MacGraths, both north and south were a scholarly tribe. The Thomond family were, in the 16th century, the ollúna, or master teachers, at the bardic school in Cahir, Co Tipperary. The Thomond McGraths have been numerous in that county and Co Waterford since that time. There were plenty of small farmers in South Tipperary in the 19th century, and into modern times.

In Sir William Petty's 'Census' of 1659, really an ambitious survey of Ireland and its population, both native and settler, in the Cromwellian period, we find the name as a 'Principal Irish Name' in:


By the time of Griffith's 'Primary Valuation' of Irish households in the 1850s, the top counties for McGrath were: Tipperary 450 (all figures =households), Waterford 274, Limerick 166, Cork 149, Clare & Kilkenny 145 each, and Down 134. The spelling McGrath was the most numerous with 2485 entries, followed by Magrath with 841 entries.

R.E. Matheson's 'Special Report on Surnames in Ireland' (1894, 1909), based on the 1890 births distribution, shows most McGraths in counties Tipperary, Cork, Waterford, Antrim and Tyrone. There were 233 entries for McGrath and 31 for Magrath. 131 of all entries were in Munster.

Ruadhrí Mac Craith of Termonmagrath (fl. 15th/16th c.) was the patron of the 'Annals of Ulster', a major source for Irish history and genealogy. This is the Donegal/Fermanagh family.

Miler McGrath (1523-1622) of the Fermanagh McGraths, famous for 'doing the impossible': held both Catholic and Protestant bishoprics at the same time! He'd actually started as a Franciscan friar, then became a Protestant, rising to become Bishop of Cashel, whilst at the same time 'occupying' the Catholic chair of Down. He must have enjoyed being a bishop, because he did it four times! He only married twice, however.

Master M'Grath (1866-1873) of the Waterford clan. This greyhound has been celebrated in song and story. He was Lord Lurgan's prize coursing greyhound. Legend says that he was rescued as a pup from drowning, by an inebriated gentleman. He went on to beat all the competition, in both Ireland and England, winning the Waterloo Cup three times. He was summoned to appear before Queen Victoria. He should have been knighted.

Your post will show up in News Feed, on your profile and in search results.
SUGGESTIONS
Share and remember important moments from your life.

Hi Cant find anything before our US connections, great grandfather came to VT in the late 1800's James Joseph McGrath, ended up in Jericho, VT farming. I have visited Waterford and saw remains of McGrath's castle and found a priest who was very accommodating with information about that areas McGrath's. Hope to spend more time on this , found a marriage certificate with McGraw instead of McGrath, family lore says boot legging was involved. Haha.

Hiii there... just a shot in the dark, but my brother in law is seeking his father he never met Mr William (Billy) Ferguson McGrath from South Africa. He was the Sales Manager for Electrolux Germiston during 1977. He must be in his seventies now. It was heard last that he moved to Australia with his wife, son and daughter. If you could connect us my email is jaclynsagency@gmail.com

My McGrath ancestor was Andrew McGrath, born 1818 in Galway city Salthill, died Rahoon Parish, Galway, 1883 or 1884. His fathers name was Michael and he was from Moycullen, Galway. Andrew married Julia Judith Hackett 1829-?, daughter of Michael and Catherine Carrol Hackett of Rahoon Parish, Galway. Their oldest son, Michael b. Rahoon parish, 1865 emigrated to the U.S. and settled in the Scranton, PA area to work the coal mines. His sisters Norah and Catherine also emigrated, as well as his brother in law Luke Hackett. Would love to connect with any other McGraths from Galway.

I was born in London to my Dad John McGrath who was born in Galway (Wood Quay).  His Mother Mary McGrath (who passed away in 2008 at the age of 98) was married to Thomas McGrath who I am named after.  Much of my family still live in Ireland and around Galway.

Hi! I am about to marry into the McGrath family! My fiance is from Cork, Ireland. He joined the military while young, his parents passed away, and he never got to know his family history. I was hoping to be able to put together something for him. Id like to know what the official family tartan is, as well as military background. If anyone could help, I would appreciate it. Thanks!

Greetings to all my family out there in the World. Im a member of the Glaswegian branch of the McGrath clan. If any of you knew my grandfather Joe McGrath who lived here in Glasgow until just a few years ago Im sure the rest of the Glasgow Branch would be glad to know they havent been severed from the other branches.

I am trying to find any McGraths who went to Glasgow or Edinburgh from Waterford/ Carrick on Suir any time after 1890. Or any that served in the Military in those areas.

Areas of Origin for MCGRATH

Write an email address and click 'Invite' to share this page with more members of the MCGRATH tribe.

Discover where the MCGRATH Family members live around the world

Show off the MCGRATH Family Crest…