150,979 FITZGERALD members around the world 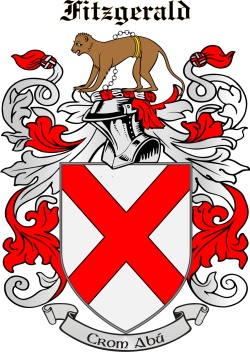 Design your own FITZGERALD Family Crest

Fitz Gerald, Fitzgerald: 'fitz' is Norman-French for ?son?. The name Gerald is of Germanic origin, meaning -spear-rule, and there is a tradition that says the Fitzgeralds originated in Schwaben, Germany. Other traditions say that they descend from the Ghiraldini of Florence in Tuscany.

Since Maurice, son of Gerald de Windsor and Welsh Princess Nesta of Deheubarth, came with the Norman invaders in 1170 the Fitzgeralds or Geraldines (which also includes the Carew, Fitzmaurice and Fitzgibbon families) became one of the most powerful tribes in Ireland.

Forming the Earls of Kildare ( a branch of which later received the British title of Dukes of Leinster) and Earls of Desmond in Munster, their fame and fortune grew. In the 15th century Garret Mor, 8th Earl of Kildare, was for 40 years regarded in all but name as King of Ireland. An early Earl of Desmond created his three illegitimate sons Knight of Glin, Knight of Kerry and the (no longer surviving) White Knight (Fitzgibbon).

In succeeding generations many Fitzgeralds who opposed English rule were imprisoned or executed in the Tower of London, as 'Silken Thomas' an inveterate rebel although born in England in 1513 (his mother being English was a cousin of Henry V11). The Earls of Desmond were in rebellion for many terrible years and became extinct in the early 17th century when the 16th Earl was killed in Elizabethan times (Betrayed by a treacherous Moriarty!). They built numerous castles, a number of which are still in good condition.

In the Registrar General's Report on births in 1890, the highest occurrences were in counties Cork, Limerick and Kerry, and it had the 36th most highest count.

Tell us about any famous FITZGERALD (or surname variant) you think we should add here. We will get our genealogists to check them out and add them to the list. Thanks!

Join the conversation with the FITZGERALD tribe

Hello, I am looking for information about my ancestors from Templemore, County Tipperary named Edward Fitzgerald B. 1759 D. 1841 in London Ontario who married Margaret Talbot. They were part of the Thomas Talbot expedition who organized a group to travel from Ireland to create a new colony in the London, Ontario, Canada about 1818/19. They had

Hi, I'm new here, I know most of my family lived in Dublin, There was a suggestion that we came from Knockavanna , But I have not been able to trace them there so far . I am interested to find any of my family who may have emigrated . Thank you All

I'm looking to find a Geraldine Fitzgerald who was born in the early 1940's in Dublin Her Dad was James Fitzgerald and mother was JANE PENSTON , She has a brother name Gabriel

Looking for ancestors, siblings and descendants of William Fitzgerald & Mary Duggan/Small, born about 1840; married Mary Duggan (or Mary Small depending on church & civil records). Between 1865 and 1879 they have Patrick, Michael, John, Thomas, Catherine, James and twins Anne and Bridget - possibly others. I'm descended from John, and John and Catherine emigrated to New Jersey, USA in the 1890s. The twins apparently died before they were 1 year old. Most were born in Bruff, Hospital and Ballingoola.

Garda sergeant richard Fitzgerald born @ 1895 ballincollig cork. Member of IRB, civic guard and one of the first garda schiocana . Reputably one of michael Collins close allies during the troubles and civil war .

Hi My name is John Fitz-Gerald, I am looking for info on my G.G.G-father Robert who I believe lived in Rathdowney Laois and was related to the Earle's of Kildare. He married Mary Connor and had 4 sons and 5 daughters, 1) Edward was killed when he fell from his horse 2) John who was a major in the Scot's Grey's 3)Robert who was a major in the Black Watch 4) Hans who was a captain in the Irish Guards He Married Anne St. Clare about 1866 and emigrated to Durban South Africa1867. The daughters were 1) Nan 2) Jessie 3) Theodora 4) Eleanor And 5) Geraldine. Anyone with any info can e-mail me on johnfg1949@gmail.com

Hello My name is Pamela Lawson (Fitzgerald) I have been searching for my ancestery My grandfather Edward Charles claimed to be born in Melbourne Australia 1858, on his marriage certificate Father Martin married to Mary Ann /Jane Murphy I don't know where in Ireland he could have come from. To the best of my knowledge we don't know of any relatives in Australia If some light could be shed on this I would be extremely grateful .

Looking for info. on my Great, Great, Great grandparents. John and Martha Fitzgerald of Tipperary. A daughter, Agnes came to Canada aprox. 1847 and married Arthur Churchill in 1848, settling in Ontario. Any information would be greatly appreciated.

Looking for information on John Fitzgerald born about 1834. Might have been buried at St. Mary's Church, Dungarvan, Kilkenny. I have a letter he wrote from Dungarvan Union in 1880. Also looking for info on his son Edward B born in 1852. Mother was Bridget. He emigrated maybe in 1863.

Hello. My name is Cheryl Christie. I am looking for information about my great grandmother, Mary Fitzgerald. She married John O'Dwyer. They had three children, Kathleen, James and John between 1870 and 1880 in Tipperary or Limerick. I am trying to determine Mary's birthdate, date of marriage and date of death. Any information would be welcome.

My Dad, John Fitzgerald was born in Tramore Co. Waterford. He had four siblings, Frank Freddie, Mamie and Kathleen. His father, John Joe was born into a very big family in Tramore in the gatehouse of what may have been a convent or priory. My grandmother was Eileen Dunne. I think my great grandfather may have come from either Waterford or Wexford.

In 1850, John (b: 4, Mar 1826), Richard (10 Apr 1827), James (b: 4 May 1828), Catherine (5 Dec 1829), John (20 Sept 1831) traveled to the US through New York, Settling in Buffalo County, WI. They were baptized in Dromin-Athlaca, Limerick county. Parents were William Fitzgerald and Johanna Brown. Richard is my Great Grandfather. It would be great to make any connections,info on how to identify William and Johanna. I don't imagine there would be family left since all the siblings left together.

Hi my name is matt1965- my dad johnSean 1929-my grandad john 1898 my great grandad William187 7 my great great grandad john1847 he was from ballingarry Tipperary i am look for info on his sonsRichard 1872 and john1887 and their sisters Ellen, Johanna, Mary, Margaret anyone with any info can e-mail me mattskarategmail.com

Areas of Origin for FITZGERALD

Write an email address and click 'Invite' to share this page with more members of the FITZGERALD tribe.

Discover where the FITZGERALD Family members live around the world

Show off the FITZGERALD Family Crest…